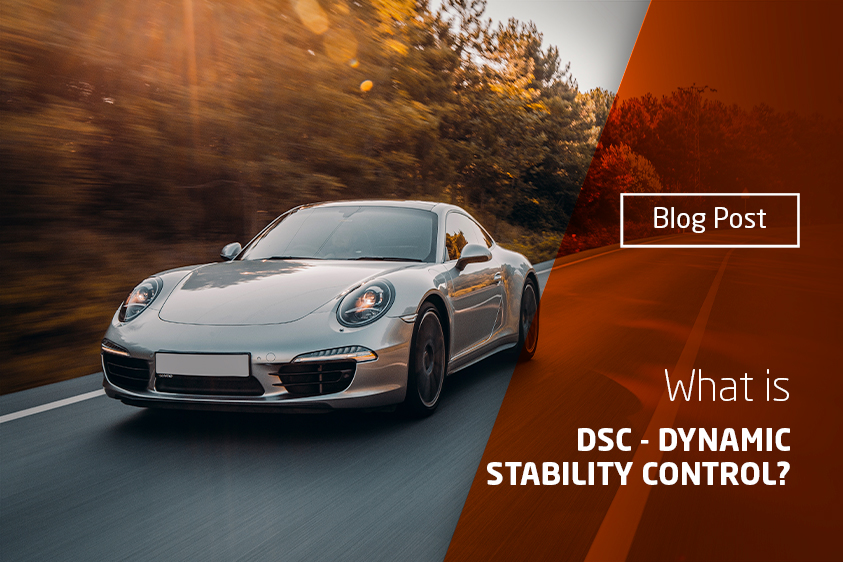 Modern cars are simply stuffed with various systems. Some of them are to make it easier for drivers to drive, and others are responsible for safety. The DSC system is one of those that we can place in both of the above-mentioned categories.

DSC stands for Dynamic Stability Control. It is therefore a system which is essentially a dynamic stability control system for vehicles. It can be treated as multiple systems (including ABS, EBD, BAS etc.) in a nutshell. Responsible for the stabilization of the car’s track. It usually activates in two situations:

How does the DSC system work?

A number of sensors are responsible for the proper operation of the DSC. They monitor, among others accelerator pedal position, brake system pressure, current steering wheel angle, wheel speed and acceleration (lateral and angular). By analyzing all these data on an ongoing basis, DSC learns about the occurrence of oversteer or understeer in the blink of an eye. If it goes off track, the hydraulic unit activates and the brake fluid pressure in the circuit increases. This, in turn, leads to an increase in the rotational speed of the selected wheel (one or more) and the braking of the others at the same time. Everything is done almost imperceptibly, as the driver is in control of the car and the direction of travel all the time. The DSC system makes it easier for the driver to control the car, thanks to which the risk of falling off the road is significantly reduced.

DSC system is in fact the equivalent of the more widely known ESP. The abbreviation DSC is just one of the possibilities for naming this system. The general accepted name is ESC, which we translate as Electronic Stability Control. This term best describes the essence of the described system. It has been recognized, among others, by by the European Vehicle Manufacturers Association or the North American Society of Automotive Engineers. In short, DSC is simply a trade name, one of many in use. It appears under this name on Land Rover, BMW, Mini, Jaguar, Ford and Mazda vehicles. As synonyms DSC should be considered for example:

– ESP (brands that are part of the Daimler AG concern);

DSC system – when is it better to turn it off?

DSC system is sometimes turned off by professional sports drivers. During the race, he could be more of an obstacle than help. However, not everyone is a racing driver. So in what situations is it advisable to turn it off by an ordinary driver? Usually, however, it can be turned off manually, which is done with a button on the console, or settings available from the display. Deactivation of DSC is advisable when traveling on unpaved roads, specifically on soft surfaces. Under such conditions, the operation of the sensors would probably give unbelievable results. The readings going to the computer controlling the system will be based on erroneous data resulting from driving, e.g. in the mud. As a result, the system will turn on completely unnecessarily, which will be not only pointless, but also irritating and hindering the entire journey. Another situation where it is advisable to manually disable the DSC is driving in the mountains with snow chains on the wheels.

The stability control system debuted in May 1995. Under the aforementioned name, the ESP appeared in the Mercedes S-class (W140 series) in the coupe variant. We had to wait two more years for the popularization of ESP. Here, too, Mercedes-Benz played first fiddle. ESP was used as part of the standard equipment of the Mercedes A-Class, which had mishaps during the first tests. They consisted of falling out of the road during the “moose test” in Sweden and rolling over during dynamic driving between cones. Thus, the small Mercedes A-Class became the first car in the world that was equipped with this system as standard. Since 1999, ESP has become a standard for Since 2011, the stabilization system must be on board all cars sold in the USA, because the Americans calculated that installing the system in each car will save up to 10,000 people a year. which is not worth saving.

No comments to show.