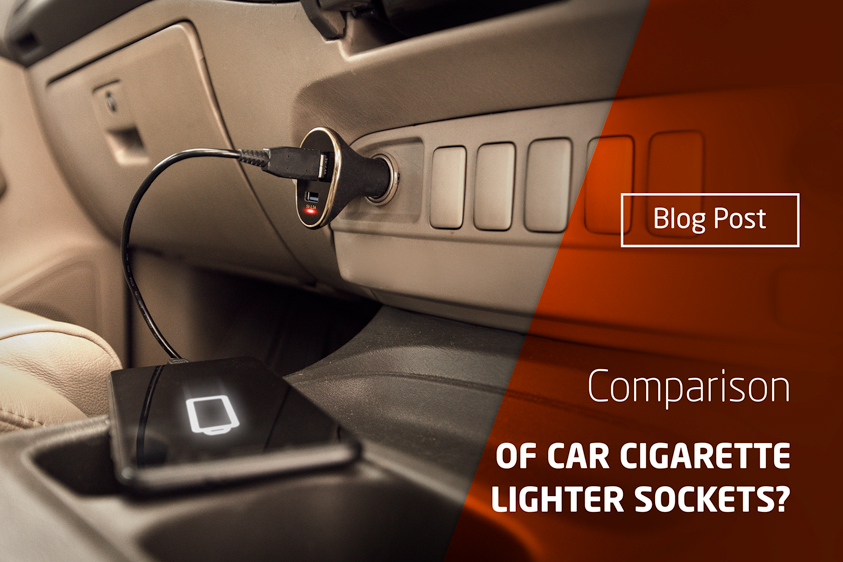 Car sockets are one of the many elements of the basic equipment variant in all cars produced today. They can also be easily found in older models of passenger cars, vans and trucks. Due to the huge number of potential applications of such a plug, it is not surprising that it is also available in motorcycles, scooters, quads and tricycles. A car socket is very often described as a car lighter, because in the past the number of commonly available accessories that could use this plug was basically limited to simple and not very safe heaters. The progressing technological development combined with the trend of miniaturization of consumer electronics has undoubtedly contributed to increasing the potential functionality of sockets in cars and motorcycles. Currently, cigarette lighter sockets can be used without any problems to power and charge smartphones, navigation, recorders, air fresheners or the use of compressors. Where is the socket for the car located? Are the cigarette lighter sockets the same in all vehicles? What is the difference between the European and the American socket? We will try to answer all these questions in the article below.

Where do car manufacturers most often install a cigarette lighter socket?

The car socket is usually located in the central part of the cockpit because this is where the container serving as an ashtray was located. In some car models, they can also be found near the storage compartment on the passenger side at the front of the car. In a richer version of the equipment, cigarette lighter sockets are also found in the rear seat region. Examples of such cars are, above all, luxury models of passenger cars and city limousines. Particularly noteworthy is the segment of off-road vehicles and SUVs, which are very often equipped with additional sockets in the trunk. This type of solution is most useful for long journeys, as it is thanks to them that you can freely use electrically powered onboard refrigerators.

Are European car sockets different from American ones?

In terms of a car cigarette lighter socket, the European and American variants can be distinguished. The vast majority of cars produced today use the American socket model, which in the case of European cars may seem not very intuitive. It is also worth mentioning that there are many adapters and adapters on the market that can be useful in the case of older classics. Both types of sockets perform exactly the same function, the only difference is the diameter, which in the case of a rare European type of socket is just slightly smaller. Refer to the SAE J563 specification for more detailed information on the US seat variant. Fortunately, replacing the old European standard with the new American socket type is not particularly complicated or expensive.

What accessories can be connected to the cigarette lighter socket? TOP 3

One of the most popular applications of car sockets today is charging consumer electronics in the form of smartphones, tablets and navigation. Thanks to the progressive standardization of ports and the possibility of purchasing an adapter with a USB port, there is no need to waste money on the purchase of several different chargers. When it comes to charging, you cannot forget about recorders, which are undoubtedly one of the most popular types of car accessories. The cigarette lighter socket can also be useful for powering cameras, sensors, beacons, lamps and on-board refrigerators, which are extremely useful during longer journeys.

Several years ago, CB Radio was very popular among professional drivers who could not use the Internet at that time. In luxury car models, you could sometimes find an on-board telephone, but compared to a stand-alone radio it was much less practical. Nowadays, CB Radio is most often found in trucks and vans, because this type of equipment is most useful when covering longer routes. The ability to communicate freely with nearby drivers allows you to minimize the risk of unexpected road checks and avoid many difficulties related to the renovation or impassability of a given road section.

Carrying a spare wheel in the trunk is much less cost effective than equipping yourself with a lightweight and convenient tire repair kit. This type of device is an excellent alternative to heavy and not very practical commuting. Before putting on the spare wheel, you have to struggle with lifting the vehicle and unscrewing the screws, which often requires a lot of strength. A compressor set with a sealant in a handy bottle is a much simpler and more pleasant solution that will work in every car.